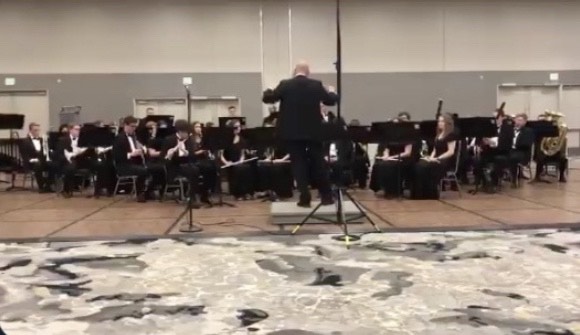 On January 30, 2020, the Symphonic Band attended the OMEA Ohio Convention for the first time in over a decade. This event is an annual three day festival at the Duke Energy Center that only five bands are invited to attend. This year, Kings was among them.

“The convention is for music educators in the state of Ohio,” said Mike Maegly, a current Kings band director. “It is a chance for attendees to gain new ideas and ‘re-charge their batteries.’”

The last time the Kings concert band attended this event was in the 1990’s, during which they played only a portion of their concert and had to share the stage with another group. Maegly now says that Kings is more ready than ever to showcase their skills.

“We have planned the pieces for this convention well in advance,” said Maegly. “The students have done extra after-school sectionals and rehearsals, and we’ve even brought in guest conductors to help prepare them for this event. Kings was good back then, but I have no doubt that we’ll perform even better now.”

Although this festival is meant primarily for administrators, its significance is not lost on the hard-practicing band students.

“It’s a privilege to attend this convention during my senior year,” said Alayna Wood, a senior clarinet player. “We all understand that this is a once in a lifetime opportunity. I’m honestly psyched to perform!”

The band has been performing these pieces since September, sacrificing potential free time in the interests of perfecting their craft.

“We knew it would be complicated with all the band has going on this time of year,” said Mike Maegly. “But [this convention] is a rare opportunity. My first thoughts were of course about logistics and preparation. I think all of the directors are very excited. It is another step for our band program!”