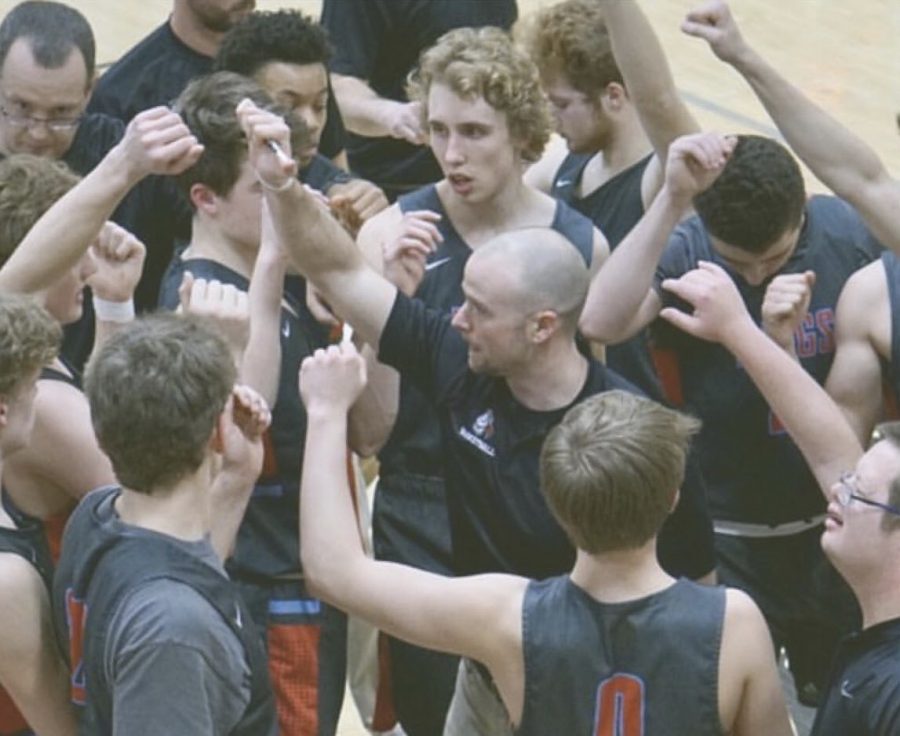 The Men's talks over the game plan. Photo via @kings_roundball on Instagram

On Tuesday, February 11, the Men’s varsity basketball team traveled to Turpin to take on the Spartans, who rank first in the ECC standings. The Spartans are a tough team defensively, allowing just 38.4 points per conference game. The Knights fought hard in the first half, and only trailed 20-16 going into the second half. The Knights were led throughout the game by senior Cody Lockwood, who scored 10 points, grabbed six rebounds, and played tough defense which led to a blocked shot. Despite Lockwood’s efforts, the Spartans pulled away with big scoring bursts in the third and fourth quarters, defeating the Knights by a final score of 57-36.

The Knights were back at home on Friday, February 14, for their last game of the regular season against the Anderson Redskins, an ECC foe. The game was a back and forth battle, with both teams unable to secure a substantial lead. The Knights were led throughout the game by senior Dylan Barnett, who scored a career high 26 points, shooting an impressive 5/9 from behind the arc and 7/8 from the free throw line. “Just working really hard every day after practice helps me feel confident and play well,” Barnett said. Lockwood also had another good performance, scoring 13 more points. Despite these strong efforts, the Knights were unable to beat the Redskins, falling by a final score of 54-53. The two losses this week bring the Knights’ conference record to 3-11 and overall record to 5-17. The Knights finished tied for seventh in the ECC standings out of eight teams.

The Knights are back in action this week on Saturday, February 22, for the first round of the OHSAA state playoffs. The Knights will take on the Lakota East Thunderhawks at 5:00 at Lakota West High School. The Knights will have a very tough opponent in the Thunderhawks, who finished the season first in the GMC (Greater Miami Conference) standings and had an impressive overall record of 20-2. “We know that they’re a good team so we have to be focused all week and give 100% effort,” Lockwood said. The Knights will have their work cut out for them and will need to have a good week at practice. “A good game plan and not being scared is the key to winning this game,” Barnett said.

On Saturday, February 15th, the Lady Knights ended their season with a loss to the Anderson Redskins in the first round of the OHSAA playoff tournament. Almost every player on the Lady Knights squad had scored, but it wasn’t enough to stop Anderson who had a player have a career night in points, scoring 21, and in rebounds, grabbing 21, which resulted in the 49-35 loss for the Lady Knights.

“The worst part about the season coming to a close is that I won’t get to coach these 5 [seniors] again. Thank you for an amazing four years. Excited to see what’s next for these seniors!” via @CoachKateWBK on Twitter.