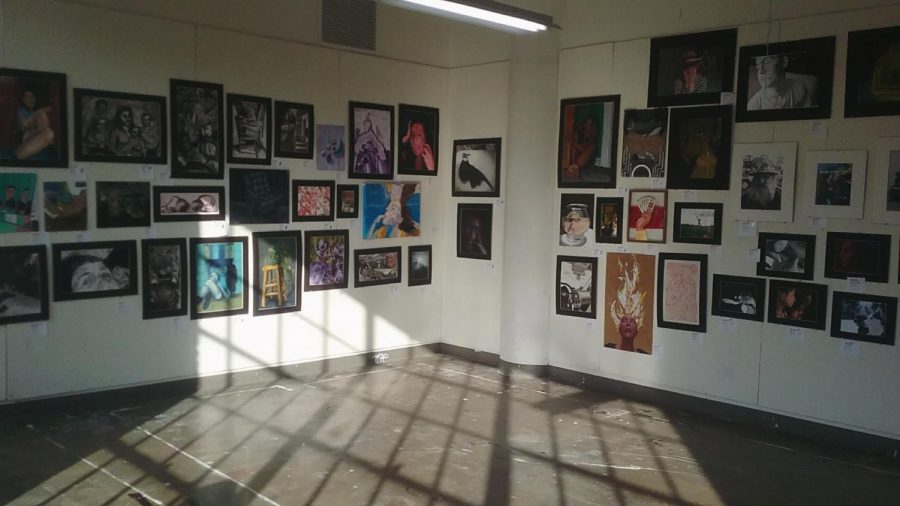 Student gallery display at the Art Academy of Cincinnati, photo by Mattie Foster

The Kings District is a great place to live and go to school. I have grown up here most of my life and there have never been problems. I grew up in a big neighborhood with kids my age, went to SLE, and played youth soccer in Landen. It seemed like nothing was wrong in my tiny little world. However, once I got to the Jr High I realized that our district had some flaws: there was no room at all walking through the halls, and  everyone was shoulder to shoulder shuffling through.

I thought since the high school is bigger I would have fewer problems. I was wrong. It is even worse. As students, we try to manage by staying far to one side of the hallway depending on which direction we’re going, but as the school grows, this solution will not hold. There is a long term solution though. The Kings School Bond Issue is a facilities funding plan that will expand different parts of our district from buildings to how students are able to learn.

The biggest problem that I have noticed in the district is the overcrowding in the classrooms and hallways. Based on the Ohio Facilities Construction Commission (OFCC) standards four out of six  of our school buildings are either at or over design capacity. The high school’s enrollment is already 40% over capacity. This causes the hallways in the high school to be so crowded in between classes that the school had to put in a pole to be used as a “round-a-bout” to direct students through the hallways like traffic.

A couple of days ago we had an assembly in the auditorium for Teen Truth. Even though only the 2022 and 2023 classes attended, there still weren’t enough seats in the auditorium for each student. The lack of space limits the number of assemblies we have as a school, and important problems such as drinking, drug use, and mental health will not be discussed. These problems happen to teens every day and it is terrible that as students we are limited on information about the topics just because there isn’t enough space for all the students to fit in one place.

There are other problems in the school that no student should have to worry about when they come to school. For example, the lines in the bathrooms are a problem. Most of the bathrooms in the high school have only three stalls, which can cause huge lines between bells, which can make students late to class. Most teachers are understanding about the issue, but some are not. Students will get in trouble because of being late to class even if it was just because they had to use the bathroom, and even in some cases, they might miss the beginning of the lesson. This is an unacceptable problem that shouldn’t ultimately be the student’s fault.

Most students don’t know what the Kings’ School Bond Issue is and what the plans would be for our school if the bond were to pass in the next election. The plans for all of the buildings in the district include: all of the elementary schools willing to convert to K-3, adding onto renovating to J.F. Burns Elementary School, Columbia becoming a grades 4-5 building and receiving an 8 classroom addition, building a new 6-8 Middle School, and adding to and renovating Kings High School. New practice fields including baseball and softball fields will be built, as well as relocating the bus garage to a new location, plus road, traffic, and parking improvements.

The main issue for Kings residents who are against the school bond issue is the “extreme” raise in taxes. However, the raise in taxes isn’t as much as it seems. The cost to the homeowner and business owner will only increase to approximately $13.75 per month for every $100,000 of true property value. That could be equivalent to deciding to not buy fast food once per month.

Lastly, the bond issue creates new opportunities for students to learn including 21st-century learning. Twenty-first century learning refers to learning by collaborating, digital literacy, and teaching students skills that will help them thrive in today’s world. However, with the size of classrooms and the limited amount of workspace, this idea of a better education can’t happen unless more classrooms are added all around the district, which the school bond issue will make happen. So, not only will the school bond issue solve the problem of overcrowding at all schools in the district, but it will also have a positive effect on the education of students that can lead to them a better future.

In conclusion, the school bond issue will be very beneficial for students at every school throughout the district. The issue will be on the primary ballot in March and all registered voters are able to vote. It will solve many problems including overcrowding in classrooms, traffic and parking issues, and overall a better learning environment. So let’s create a better education experience for students in the district and vote yes for the Kings School Bond Issue.