One year later: Teachers receive the second dose of their vaccine 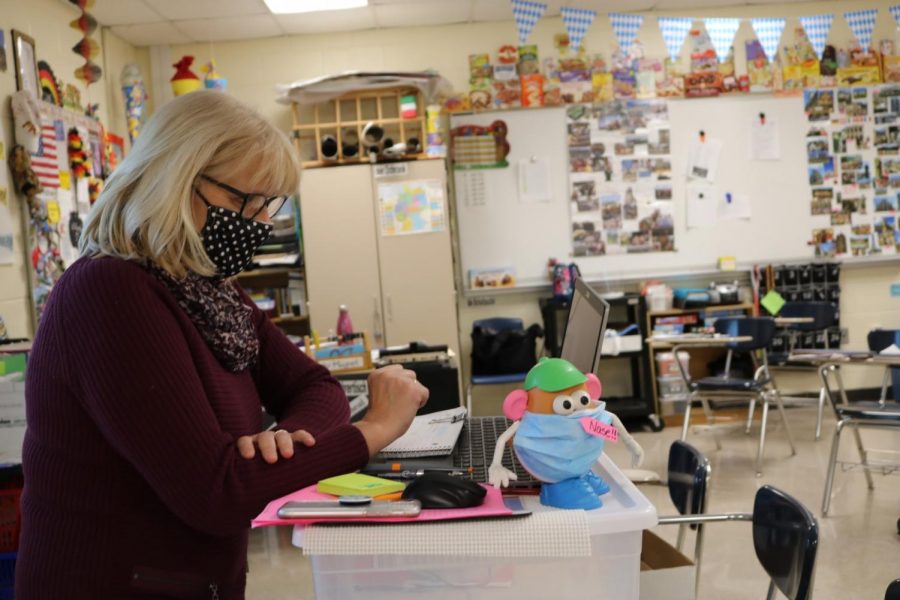 Frau König, German teacher, side by side with Kartoffelkopf, as she teaches art history to her Advanced Placement class.

Exactly one year ago on a Friday afternoon students excitedly rushed to the parking lot to begin their weekend plans. The crisp feeling of a new Spring in the air, flowers nearly in bloom, laughter and anticipation filling the hallways.

Meanwhile older Ohioans sat on the edge of their seats; anticipating something entirely different. A press conference from their state Governor, Mike DeWine. It was that same Friday afternoon when students got into their cars, boarded the buses, and did not return until the following year. DeWine had made the decision for all schools in the state to go remote due to the spread of COVID-19.

365 days later, students sit in German teacher Frau König’s room under the watchful eye of “KartoffelKopf.” König’s newfound co-teacher, a masked Potato Head, is used to demonstrate how masks should be worn, while forcing students to practice their vocabulary words. Kartoffelkopf was introduced to German class recently, and until König receives her second vaccination, he is not going anywhere.

“As a teacher, it is important to me to be in touch with my students. Having personal contact and teaching from home are not the same, so I really did not want to get quarantined and I didn’t want to get sick before I got the chance to receive the vaccine. I tried everything to stay healthy by wearing my mask and social distancing in my classroom. It was really hard for me to keep reminding students to wear their masks correctly, so Potato Head, or ‘Kartoffel Kopf’ is helping me until I can feel safe again,” König said.

DeWine has recently announced that childcare workers would be included in Phase 1C of Ohio’s vaccination rollout plan. Making Ohio 1 of the 26 states that have educators in a priority group for vaccinations.

A key component for including educators in a prioritized space for the rollout is that school districts had to have returned to some form of in-person learning by March 1st.

König  received her first shot of the Pfizer vaccine on February 19th, along with other teachers. Educators met in the gymnasium and received their shot in a timely manner. Afterwards König was free to go, except now with a sense of relief.

“We were really lucky with our administration because there were warnings about the waiting time and the long lines,” König said. “There were many different stations set up with pharmacists and nurses to distribute the vaccines. Then we got the Pfizer vaccine, which is good because then I can get my second shot in three weeks and I will be ready to rumble.”

Organizing the vaccination proved tenuous. However, on February 19th, with the assistance of school nurses, pharmacists were able to vaccinate teachers and begin preparing for the next round of vaccines.

“Kroger has been leading this and it took a little while to figure out how the process would be done. Mr. Ackerman and Mr. Luecke have been in charge of this and they took care of orchestrating the entire thing process,” Candy Anthony, the high school’s nurse said. “The teachers got their first shot and they got the Pfizer vaccine so three weeks from now they’ll be getting their second shot so the next will be March 12th. It will be handled the exact same way as the first round was nursing; we were just there to support.”

For educators and students alike, the changes made this year have been challenging. Adjusting to a pandemic has not been easy, however the Pfizer vaccine acts as a glimpse of hope for Peggy Phillips, a member of the school board.

“It is crushing not being able to see students in person as much. We just have to keep making sure decisions are made that are best for kids. I definitely see teachers as first responders, so I agree with Governor DeWine’s decision to get teachers vaccinated,” Phillips said. “Teachers who have contact with students everyday need some protection. So, it was important.”

Gabby Karrick, senior, witnessed first hand how important the vaccine is to König, and personally understood the new possibilities that the vaccine could provide. Kartoffel Kopf remains a watchdog in König’s room, and will continue to do so until König can travel again.

“She was using Kartopfel Kopf as a reminder to students how to wear their mask right. She was so excited to finally get a vaccine when she has been spending the past year only going from work to home. She couldn’t wait to maybe go out to a restaurant again  or maybe visit her family in Germany that usually visits at least twice a year,” Karrick said.

König is looking forward to getting back to a normal life, in school, with her family, and for the country.

“I’m hoping that by getting vaccinated that I will be able to do all of the things that I can not do right now, like traveling, meeting with friends, going to restaurants, and going to concerts,” says König. “Hopefully one day there won’t be a need for Kartoffel Kopf, but for now he is here.”