Can we just take a break? 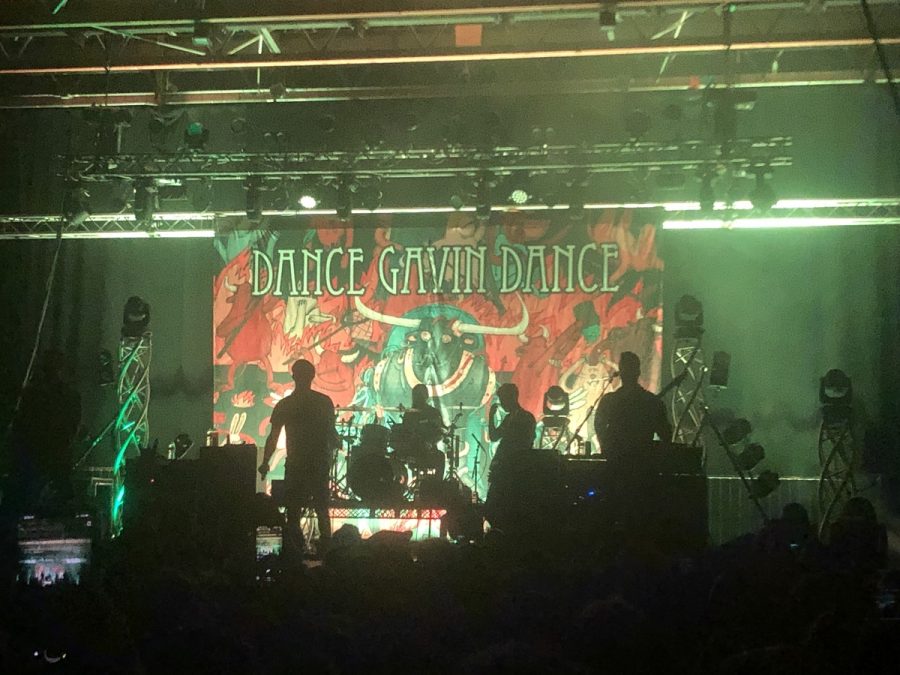 Dance Gavin Dance drummer, Matt Mingus, checked into rehab at the end of September, indicating for us all to take a break from our harried lives before it spirals out of control.

The lights went off and didn’t pick back up for the next song of the set when Tilian Pearson, a frustrated and cursing lead singer, shared the news to the joyous crowd in front of him, “Our drummer can’t play.” Immediately, the Detroit, MI crowd on Sept. 25 could see that the rest of the band members of Dance Gavin Dance weren’t ecstatic either.

After playing three songs with sloppy drum beats from their inebriated drummer, Matt Mingus, the band sent Mingus off-stage, replacing him with drum tech Dakota Sammons. By Sept. 27, the band released a statement that Mingus agreed to go to an in-patient rehabilitation center.

Dance Gavin Dance’s lyrics from “Carl Barker” call to mind at this moment: “Can we just take a f***ing break?”

They can’t catch a break.

Nor do they take any.

As Mingus said in an interview for their 2020 Tree City Sessions 2 Pre-show, “it just goes in the style of DGD, I feel like we always get dealt some interesting cards throughout the history of the band and we just adapt and then you roll with it, we just roll with it, and do what needs to be done to keep the momentum going.”

But the momentum can snowball to a breaking point; a call for change.

In these last two years, everyone received a call to change, globally, and to wake up in a personal way — whether dealing with post-pandemic job searching or resigning, questions of purpose or spirituality, or personal life issues, everyone focused on slowing down but then left it on the shelf once quarantine protocols were lifted.

And at what cost? What message did you not receive from quarantine?

Once quarantine ended and people could go back to their physical jobs, they acted as if everything was normal again. But it isn’t. Because it seems like no one is addressing their issues on the inside; everyone’s focused on the world outside of themselves.

During the pandemic, Dance Gavin Dance worked to create the album Afterburner, with a 2021 album tour that ended Oct. 20 in Las Vegas, NV. Less than a week before Mingus’ incident, Pearson caught COVID-19 during the tour and acted as if it was nothing. “It’s pretty mild,” he tweeted on Sept. 17. Fans on Reddit later said his voice still sounded rough.

Mingus, the only band member featured in the recordings of every single song, present at almost every show, proves that the band, and everyone else, needs to recognize when to slow down the momentum. Especially when people are dealing with long-term problems like substance abuse and mental health issues–topics regularly mentioned in DGD’s music.

There are other long-term problems, whether big or small, that people aren’t recognizing at the moment — and may never plan to. That’s where the break comes in.

The University of North Carolina at Chapel Hill explains why rest is important through neurology, “your brain has to resist distractions in order to focus on the task at hand. Your prefrontal cortex is mostly responsible for this kind of ‘think-work’ as it plays a major role in your ability to concentrate, think logically, and resist impulses. This level of concentration gets harder by the minute as your brain expends energy! At some point, you will need to recharge in order to replenish after working so hard.”

Imagine trying to focus on playing the drums while there are burning blinding lights, the pounding of other instruments, and millions upon millions of screaming people right below the stage. A drum set is complicated enough.

Now imagine your own struggles at the moment. Is it easier for you to sympathize with other people’s problems than to face your own? The pandemic forced us to look at our issues and reflect on unhealthy patterns. If you did reflect, did you recognize the cycles you were living and are they different now? Or are they exactly the same?

Do you see why we need to take a break?

It’s understandable wanting to get back out into the world or needing to for financial reasons. It’s understandable to live like there’s no tomorrow. But I guarantee that if you want to see that tomorrow, you have to learn to take regular breaks. Learn to live with yourself. Because you are the only person you’ll be with. As Dance Gavin Dance says in “Nothing Shameful,” “in the end we all end up alone.”

As annoyed as Pearson was when he announced Mingus’ stage departure and as dedicated as the band is to that “the-show-must-go-on” mentality, their highest priority is Mingus’ health and well-being. Dance Gavin Dance wouldn’t be where it is today without Mingus. If anything, they were heartbroken to take him off-stage and be without him in healthy and happy form, as a friend and as a bandmate.

I myself worry about my own friends and their favorite ways to relax or party at times. Everyone has a vice or poison, but when is it taken too far? Where’s the line and how thin is the tightrope? We all need something to help us take a break, but there needs to be a limit for substances and a space for general downtime. But it isn’t hard to see how sometimes it’s easier to pick up a vice rather than find the time for the healthier alternative. Winding down with substances isn’t the most sustainable way to relax, it takes more recovery than the relaxation would make you believe.

On Oct. 26, Mingus posted a video to his Instagram where he thanked the band and fans for their love and support and thanked the MusiCares Foundation, a nonprofit under the National Academy of Recording Arts and Sciences, for helping him. He plans to continue his recovery in his and the band’s hometown of Sacramento, CA. “If you are struggling with any mental health or addiction problems, don’t be afraid to reach out to someone and I really really look forward to seeing you at all the upcoming Dance Gavin Dance shows,” Mingus said.

With the Afterburner tour over, it’s safe to say that the band will be taking a break. Not permanently, but enough to recuperate and write more songs, like “Strawberry’s Wake,” about setting up shop, grabbing a mop, cleaning up the past, and saying they’re sorry. I think we could all use a break like that right now.