The new Race and Film class teaches students how to discuss culturally relevant subjects that can sometimes feel uncomfortable. 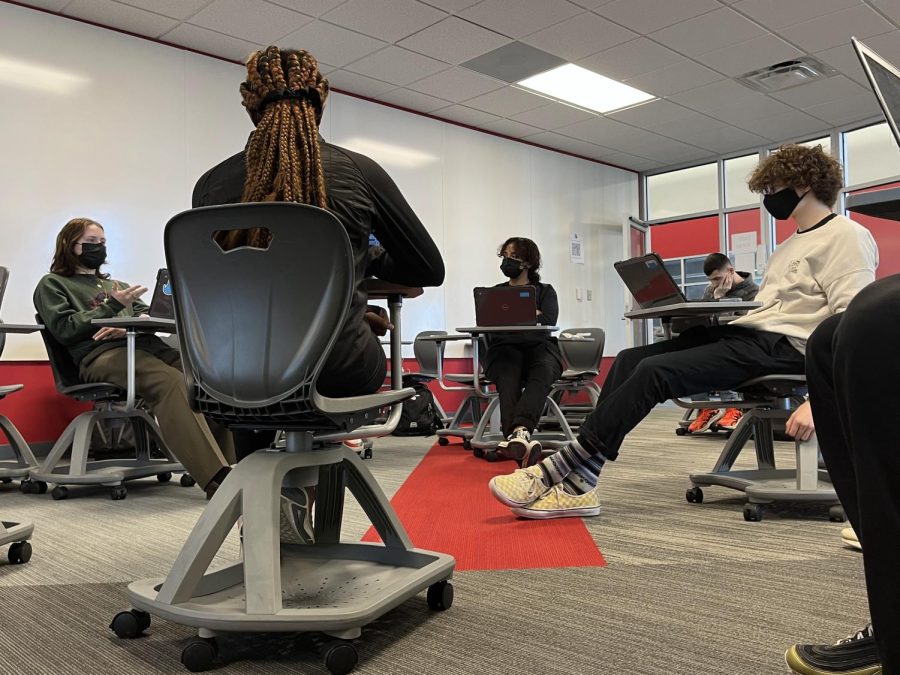 Second semester Race & Film students sit in a circle to discuss their notes about the film, Bury My Heart at Wounded Knee.

Six students walk into the class and sit in the back circle of desks far away from the board as if they were a small collective ready to chat amongst themselves while a traditional class was taught. They set up their chromebooks and begin clacking keys, placking their thoughts on their notes document before they turn to each other to discuss. Today’s topics are why people don’t want race to be taught, and how hate groups form. The class casually moves from topic to topic like a good conversation between friends.

Last semester the new Race & Film class introduced juniors and seniors to an opportunity to discuss movies based on true events and real-life news about race and racial issues. Andre Hansard teaches the semester-long class that is meant to go in-depth into moments of history from early America to the 1990s in the span of three units.

The first unit discusses the influence of slavery on the development of race in the U.S. The second unit focuses on the 20th-century movement for racial equality, including the fight for civil rights and the struggle for immigrants to be accepted as Americans. The third and final unit then covers current mechanisms of continuing discrimination.

“[We talk about] stuff like the idea of systemic racism. Is that real? Is that a real thing or not? We talk about the issue with police brutality, things of that nature, the criminal justice system, and why there’s a disparity between the races and who’s getting locked up in this country,” Hansard said.

The films played in the class are chosen based on the racial subject matter, how the film’s topics relate to current events, and the feedback of students. Parents approved these films through permission slips at the beginning of the semester to ensure that parents and Hansard were both comfortable with showing the films to the students.

“A lot of these movies aren’t gonna be edited. I edited out any sexual stuff, but language and use of the n-word, I try to keep these films as authentic as possible,” Hansard said. “And I know as a parent I would want to know what my kids watched. These aren’t movies I would show to eighth- or ninth-graders because of the mature content within it.”

For senior Lily Kirby, the class opened her eyes to the emotional and long-lasting impact of history, providing more context to subjects she thought she was well acquainted with.

“In history textbooks, you don’t learn the emotional aspect of it. Like I didn’t know exactly how awful [the issues were] and Payton and I would literally be crying in class. But just mainly the people’s experiences and even the teacher[‘s experience], it’s just heartbreaking because you don’t get to see that all the time. And then once you are exposed to it, it’s like, ‘oh my god,’” Kirby said.

The discussions in class add to the process of observation and application of the films by allowing students to share their perspectives, helping them understand the films more and providing them a way to see every side of the story, such as two oppositions in a conflict.

“Sometimes we talk about ways to fix it, or how we still see some of the things that happened in the movie in our current culture,” senior Payton Mueller said. “Just to relate it more to current time, especially when we’d watch Malcolm X and talk about the Black Lives Matter. We talk about the other side and how to politely argue. It’s definitely made me nicer to people I disagree with. He was like, ‘Payton, you can’t just tell them they’re stupid.’”

During a recent discussion, Hansard shared an example of his ninth-grade class last year where the students had to create songs about the different types of power, including power in numbers and using the saying, “all lives matter,” as their lyrical response to BLM. From there, Race & Film students talked about why people who used the phrase “all lives matter” didn’t feel that it was racist.

“Miles made a good point. I hadn’t thought of this point before. He said people that say all lives matter, they believe that they’re actually supporting equality more than Black Lives Matter,” Hansard said. “I think Leila added the point, that yes, but they’re confused with the difference between equity versus equality. Yes, we agree in this country that everybody should be equal, but everybody’s not equal in this country.”

At the University of Cincinnati, the importance of civil discourse is also strong in the Sex and Race at the Movies course taught by Professor Valerie Weinstein, where students come from many different backgrounds, academically or culturally.

Weinstein noticed that students appreciate the opportunity to come to her class and watch movies they haven’t been exposed to  after listening to lectures on biology or business. “[They] get to come here and watch movies [they] wouldn’t have seen before and discuss them with people [they] wouldn’t have met before. And they seem to really respect each other and learn a lot from each other and that’s not to be taken for granted these days, anywhere.”

Though the discussions in this UC course focus more on the film-making details, such as editing, sound, or writing choices, its main emphasis is on how Hollywood portrays and represents minorities and how that then forms, or changes, the general public’s perception of those groups.

“Part of the goal of a class like this is to show that there isn’t just one story of any one kind of person. And the problem is if you’re underrepresented in Hollywood, sometimes the audiences only get one story about you. So some of these movies are very much about, if not biographical, about the communities that the filmmakers are from,” Weinstein said. “And some of them I would say, a little less so. They’re just general, maybe like parts of their culture or parts of what it’s like to be in their specific gender, race, ethnicity, etc.”

The University of Cincinnati requires diversity and inclusion courses as a part of general education requirements in what they call Breadth of Knowledge (BoK), which expands students’ critical thinking, communication skills, literacy skills, knowledge integration and social responsibility, in topics including gender, race, ethnicity, class, disability, religion, and other forms of identity.

The BoK starts at the freshman and sophomore undergraduate levels, meaning that students enrolled at UC begin their focus on inclusion and diversity discussions early. Sex and Race at the Movies itself is an introductory course.

“We all recognize we have our own perspective and our perspective comes from our own background, who we are, what we were raised to be, what the movies have told us what we should be when we grow up, and how we should behave. All these messages we get make us who we are and make us see things from that perspective,” Weinstein said. “Being able to recognize both what is coming from your perspective and that it’s not objective, but also listen and hear how someone from another perspective sees it and understand where it’s coming from, those are skills that then make us able to talk through more contentious issues in a more thoughtful and productive manner.”

In November 2016, the U.S. Department of Education released a report called “Advancing Diversity and Inclusion in Higher Education,” which included information on how this advancement would encourage the equity of minorities in higher education and what benefits would be created. The report stated, “[d]iverse learning environments help students sharpen their critical thinking and analytical skills; prepare students to succeed in an increasingly diverse and interconnected world; break down stereotypes and reduce bias; and enable schools to fulfill their role in opening doors for students of all backgrounds.”

A large part of high school is the preparation for college, other postsecondary education, or the workforce, and if colleges and businesses are continuing to inform and practice inclusion in their day-to-day, why can’t high schools?

Debates about Critical Race Theory (CRT), the “new catch-all” phrase for the teaching of racism, white privilege, diversity and inclusion in school districts as reporter Tyler King explains it to NPR,  portend that diversity and inclusion are being taught inappropriately to younger aged students. Weinstein believes that there are ways to teach it correctly, rather than not teaching it at all.

“Being able to talk about hard stuff is a skill we all need and the hard stuff is there whether or not we pretend it’s there. There are things you talk about with your kindergarteners in one way, like ‘don’t hit,’ ‘don’t bite,’ and you’re not going to give them the lecture on domestic violence, but that’s building up to when you’re an adult, you don’t hit,” Weinstein said. “There’s a developmentally appropriate level. We should begin from a young age to teach our children to be nice to everybody and to be fair and equal that then undo some of the problems you’re trying to prevent.”

The Kings district has been growing in diversity since 2018 when The Enquirer reported on the racial makeup of the community when the district was consistently a 90% white majority, fluctuating between a 15% and current 12.1% minority population. Now, the elementary schools are approximately 35% diverse compared to the high school’s estimated 10%.

With diversity growing, there’s going to be a call for more representation, understanding, inclusion and respect for diversity in the classroom and curriculum, rather than the bullying and inappropriate words and actions of Kings alum. Due to that, Hansard wanted to ensure a class gave students the voice to speak out in support of diversity.

“I think there are students who want to learn about this stuff, that feel kind of marginalized at this school, or even worse, like they can’t even be themselves, they have to be silent against some of the things that they see because the only way you combat this level of racism, you have to speak out against it and I don’t think that’s very popular here,” Hansard said. “So this class at least gives them an opportunity to share some of those experiences that they’ve experienced, and for those that haven’t, to learn about it and get to see that different perspective.”

“There are even some kids of color that still don’t understand the importance of their color, and there are kids that unfortunately still want to fit in with the white crowd and want to be seen as white, or fit in, and I understand because I used to be that way too. But it’s just sad to see because I wish they would embrace their color more and understand what that means,” Blackwell said.

The class started its second class this semester with thirteen students, but despite the small numbers this year, students recommend it to anyone interested.

“Race & Film is a class you take if you want to learn more about accurate black history and not just the basics from the white man’s textbook, you know, the stuff that actually happened,” Mueller said.